Sociology, Marketing, and EFL: some thoughts on #FitchTheHomeless

As many of you have heard, the CEO of Abercrombie & Fitch hates fat, non-cool people.  Is anyone surprised? No? Ok, good then, moving on.

This article showed up not too long ago, detailing why A&F doesn't market to XL or XXL women (and why they do market to XL and XXL men, which is another post  in and of itself on the double standard of size and 'attractiveness' which I will not get into now, but have very strong opinions about.) 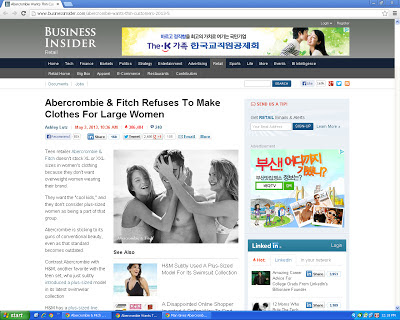 In a nutshell, A&F only wants "cool" people to wear their brand, to keep the brand pure with "thin and beautiful." This shouldn't really come as a shock to ANYONE who has ever, you know, walked by an A&F store, seen anyone wearing A&F, or looked at an A&F advertisement.

“In every school there are the cool and popular kids, and then there are the not-so-cool kids,” he told the site. “Candidly, we go after the cool kids. We go after the attractive all-American kid with a great attitude and a lot of friends. A lot of people don’t belong [in our clothes], and they can’t belong. Are we exclusionary? Absolutely."

This morning, my sweet Saffa sister posted this article on facebook and it caught my attention immediately. In the attached video (see below), a writer from LA named Greg Karber decided to re-brand Abercrombie by giving old A&F clothes to the homeless.  He invites everyone to partake in his re-branding efforts and broadcast their contribution using the hashtag #FitchTheHomeless. I love his thought process, I really do.  Sticking it to the scantily-clad Abercrombie man (with washboard abs) using social media?? WOOHOO! Let's do it!! 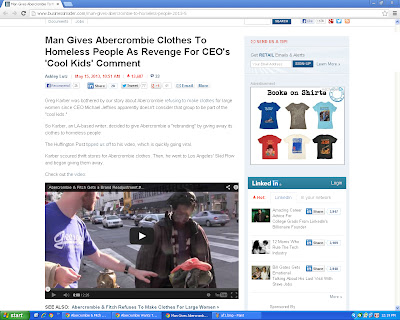 I saw the video this morning and instantly decided to base half of a lesson on it. I felt like there was enough cultural relevance to Korean society that would make for some really interesting dialogue in my Screen English class, and since this particular class is 2 lessons ahead of the other section (thanks to the incredible Friday holidays we've had), I could afford the extra time.

First, we read the earlier article and I explained about the status symbol that was A&F to an average American teenager, how I was very much not a "cool kid" in high school and that my mother would never let me drop that kind of change on clothes (100 dollars for jeans with tears already in them? Absolutely not, Zara. And then my dad would chime in: Z, I've got jeans with holes in them, you want to wear those instead? Aren't my parents great? I'm so thankful that they are wise, raised me well, and never let me shop at A&F).

My students had some great opinions and questions about the article.  Mostly, they were flabbergasted that he would SAY such outlandish things out loud.  It's one thing to be influenced by a "beauty culture" (something very very much a part of Korean fashion and society), it's another to come right out and articulate it. They were able to compare the opinion of the Abercrombie CEO to views held all over Korean society in regards to beauty and weight.

We were able to talk about (but didn't get into it very deeply) the subtle influence and impression of such opinions on individuals through the mass media, both in America and Korea.  Maybe we don't hear opinions like that every day, but we damn sure feel them. The pressure. The impossible standard of beauty and perfection and acceptance. And the damn-it-to-hell feeling that we will never, never measure up.

We talked about how women might feel about his comments.  We briefly entertained the thought of our own daughters someday having such horrific statements made toward them. I mean, it's one thing to call me fat and ugly and tell me I can't shop in a store for skinny, cool people. It's a WHOLE 'nother bag of potatoes to tell that to my [non-existent, proverbial, future] daughter. I will go ALL mama-bear on you at the very thought.

We watched the video next, stopping when I felt we should dig into the main ideas and broad themes. It was a great opportunity to introduce new and/or cultural vocabulary like "irony" and "thrift shop" and "douchebag."  I didn't explain the "narcissistic date rapist" line, but inwardly cracked up because... yes. [Another aside: how funny that he said to broadcast your contribution to the cause on facebook and twitter, then added "and Google+ ...if you actually use it. Bahaha poor Google +.  The emotionally-abused stepchild of social media.]

We had a great moment talking about marketing, target markets, and branding. My students, yall.  My incredible students! Marketing, business, understanding the effect of what the CEO has said on the general consumer, and understanding that their so-called "target market" will probably, tragically, be unfazed by the misogynistic, arrogant opinions of a pretentious asshole. How will/have his comments affect public opinion? Likewise, how will they affect A&F profits? Only time will tell.

I tell you what: I was in teacher-geek HEAVEN at this point. My students were involved, discussing sociology (which I love) and marketing (which I love and studied as part of a business minor, which goes HAND IN HAND with sociology!) in an ENGLISH AS A FOREIGN LANGUAGE class!! Higher-level thinking! Controversy in advertising! Thought-provoking debate! Such great fun! AND ALL IN A LANGUAGE THAT THEY HAVEN'T MASTERED. Impressed? YOU SHOULD BE.

At the end of the lesson, several students came up to me to talk more about what we'd read and seen and what their reactions were. (We even talked more about irony: how ironic it is that A&F advertises its clothes by the lack of them.)  Is there ANYTHING more rewarding for a teacher than to hear students enthusiastically continuing a lesson after class? That by itself brings a tear to my eye. They are learning! They are engaged! They are voluntarily participating!

The last student who waited to talk to me,

Zara, by asking us to help take down Abercrombie & Fitch, he is saying something about the homeless that hurts.

By attempting to degrade A&F clothes, he is saying that poor people are worth less.

If he is attempting to sully the name of A&F by giving their product to the homeless, he is calling them dirty.

Why would I give clothes - a brand - that I don't respect to people that I do?

Maybe the people in the video were reluctant to receive them at first - not because they don't want to be mistaken as narcissistic date rapists (LOL) - but because of the dignity of the human condition.

This kid, this beautiful 19-year-old-ish student, got something from this video that completely passed me over the first time I saw it, but started to sneak up on me the second time... there's something wrong here...

This boy got compassion.

I have never been so proud of a student.  Lord, that we would all look at your creation with such love.
at 1:58 AM