A mini-trip to South Africa by way of South Korea: Braai Camp at Jirisan National Park.
...
Every year, Hunter's puts on a Braai Camp for Saffers in South Korea. Remember how I went to a braai a few months ago? This was 'n bietjie (a little) like that, but our Jeonju braai was a klein (small) braai and THIS was a groot (great, big) braai.

Hunter's is a brand of South African hard cider. It's pretty amazing. There's a gold and a dry, and if I were to review them I'd say that they both have their merits, but I prefer the dry. It's a little crisper, while the gold is a little sweeter. Anyway, Hunter's sponsored the weekend of braai happiness and many of our pictures look like we're living in a Hunter's ad campaign.


The event started Saturday around lunchtime. They sold boerewors rolls for lunch, which are the most amazing beef links on a bun ever. So delicious. I want another.

We spent a chunk of the afternoon down at the river. I don't know if you know this about Korea, but we have this concept called "seasons" which is mostly unheard of in Texas. I am used to "summer," "late summer," "off-and-on-winter-ish," and "early summer." Unfortunately for me, September in South Korea is "early fall" which means that river was ICE COLD and there wasn't enough hot weather going on outside the river to support the crazy decision to jump in. I think you all know me by now, though... I totally got in anyway. I'm gonna rack up as much time swimming as I can, even without a good reason. It wasn't *too* bad once you got used to it, and if you stayed submerged to your shoulders, you didn't notice the absurd cold. Side note: Monty (not pictured) was like "oh, I wasn't going to take off my shirt cause I'm so white, but then I saw you and I felt better." Y'ALL. THIS *IS* MY SUMMER TAN. Fair skin problems. Welcome, welcome to my life.

It was so nice to play with the kiddos at the braai. It felt right, taking up my role as Tannie (Aunt) Zara with the 3 Julius children (they're also from Jeonju!). They're such sweet kids! I soaked in the cuddles and playtime. <3!! 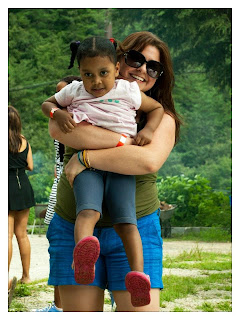 Obviously not everyone in attendance *was* a Saffa. They're kind enough to include us wannabees (the nice ones even call us *honorary Saffas* - isn't that sweet?) and friends. Most people were impressed by Jennifer's and my limited Afrikaans (!! we've got good teachers). We learn differently, but ons probeer. We try. She even uses a real book to study. So far, I use youtube. I joke that I'm in Afrikaans kindergarten. Ja. Nee. Blou. Rooi. Die leeu is kwaad. Die olifant is groot. Ek weet nie.

Learning a new language is SO. MUCH. FUN. Being sarcastic in a language that you barely understand is even MORE fun. Really, once you get a few basics, you can smile and nod your way through a surprising amount of conversation. Besides, as we learned in the movie Hitch with Will Smith: "90% of what you say ain't coming out of your mouth." Maybe next year I'll be able to hold an actual conversation! Goal: set. I need to get that study book.

Braaiing itself is a big deal. The men do the meat, the women fix the sides. It's cultural. It's done a certain way. You don't mess with tradition. I, for one, am ok with this. That's mostly how it's done where I'm from, too. Besides, I love sides. I am not good at the grill. So.


There was so much food! The meat was out of this world, there was potato salad, cole slaw, braaibroodjies, salad, wine, melktert, etc. etc. I didn't have enough room for everything that I wanted to eat! With the sun going down over the mountains, we feasted on a mouthwatering, joyous dinner.

AND THEN WE WATCHED RUGBY. South Africa played Australia at 7. They've never beaten the Wallabies at home in Australia... that is, until SATURDAY! Jacques sat next to me and patiently explained, well, everything. I love sports and I'm absolutely obsessed with American football, so it was so much fun! Something exciting would happen and I'd be like WHAT WAS THAT!? By the end of the 2nd half, I was hooked. Standing up, arms crossed, just like I do when I'm watching the end of the 4th in a tight game of American football. It was awesome. AND THEN WE WON! Soundly. And then the really drunk saffas did crazy things... like moon the projector... bahaha, whatever. As if I haven't seen crazy drunk shenanigans at tailgate parties in the States. *Crazy* knows no nationality. (The game was so short! I'm used to games lasting around 3.5 hours.) 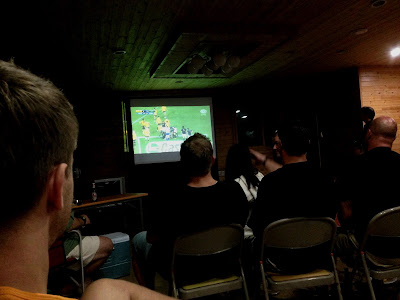 There were live bands all afternoon. They were ok, but when the singers would start talking... bless their hearts. Just sing, honey. Toward the end of the evening, sokkie dancing was attempted, but it wasn't as good as sokkie-ing to 'proper sokkie music,' from what the Saffas said.

I'll be honest with you. The sokkie part of the evening was a... struggle.

The guys were so patient with me. I quickly figured out that every guy sokkies differently. For example, Egbert is 6'4" and holds his extended arm somewhere up by his ear... um... I'm 5'2" y'all. I couldn't reach. Urgh.

I love to dance in general. Back at home, I go dancing at country bars whenever I can. Get me on a dance floor and I'm a happy girl. I learned to two-step, polka, waltz, etc. in college, but even back then I had to *learn* to follow the guy's lead. It was hard, I wasn't good at it, and I'd accidentally try to lead. I had some very patient guys teach me and (through much trial and error) I finally figured out how to respond when the guy pushed you one way or another.

Fast forward from then to Saturday night... it's like I was starting from scratch. I was trying to translate my knowledge of two-step into sokkie and you just can't. It's close, but it's not. I didn't know *what* I was supposed to be following, and every guy does it differently! I felt like I was 16 again, completely lost and frustrated. If I'd try to follow a spin, I'd hold my hand out the way I learned, pulling back a little, keeping tension in the line to be pulled back through the spin. Oops- wrong. Apparently, I need to keep my fingers loose and "just follow" ... Ugh. Also, I'm a bit of a know-it-all, so it was hard. How do you "just follow" when you don't know what you're supposed to be following?

*mega metaphor for life as a Christian, huh? submission to Jesus, no matter what he's about to do with you? mega metaphor for my personal struggle with pride and just let me do it, ok? attitude*

Lord bless my friends, cause I try not to be *that emotional girl* most of the time. And yet. I was a bit more tipsy than I should have been (taking shots right before you dance isn't a great idea... darn you, delicious springbokkies) and, welp, the emotional-self-control went out the window. They actually handled the emotional overload well (thanks, y'all).

In the midst of the emotional mess, my nose ring fell out and I took that time to go off and have my own little pity party and put in a new nose stud. We spent the rest of the evening hanging out by the fire. Once in a while I'd ask if we could dance to something, then pout because the answer was no, this song's too slow. (My niece might have gotten some lessons on pouting from me... I'm a pro.) By the time they finally played 'proper sokkie music,' everyone in our group was off to bed.

It was really fun to try, though! Next time, sokkie. Maybe I'll figure you out next time.

I woke up bright and early Sunday morning (cause I'm a morning person now and it's become impossible for me to sleep in) and went for a walk to the river for some quiet time. Read through Psalm 37. It couldn't have been better.

We spent the rest of the morning hanging out, playing frisbee, eating breakfast, talking, walking, and eating ice cream before driving back to go our separate ways. My poor car actually made it through the mountains, can you believe it? LOTS of prayer went into that part of the trip, oh man! The brakes held out, though, and I didn't do too much damage to the transmission and/or gear box. My friends in the car were so supportive of my stressed-out driving. Bless them! Even when the brake-fluid-hydraulic-stuff spazzed out on me and I had a minor panic attack (heart in throat), they were calm, cool, and collected. I don't deserve them! Amy even came all the way back with me to Jeonju to make sure Sarabi and I were safe.

Y'all, I just love my friends. What a blessing. It was such a unique weekend. Oh, this crazy life! Sometimes I wonder about the intense blessings I've received in this season of life, then I remember what I've read:


"When people's steps follow the Lord, God is pleased with their ways."
Psalm 37:23 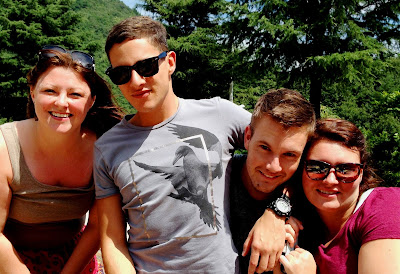 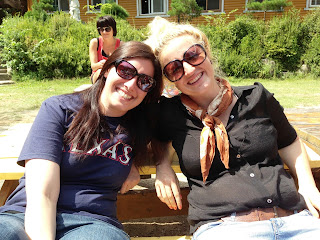 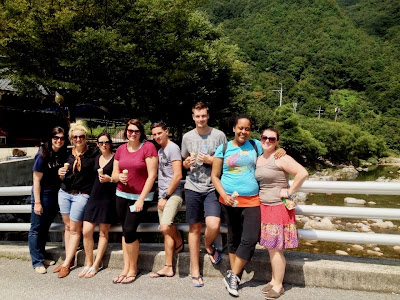